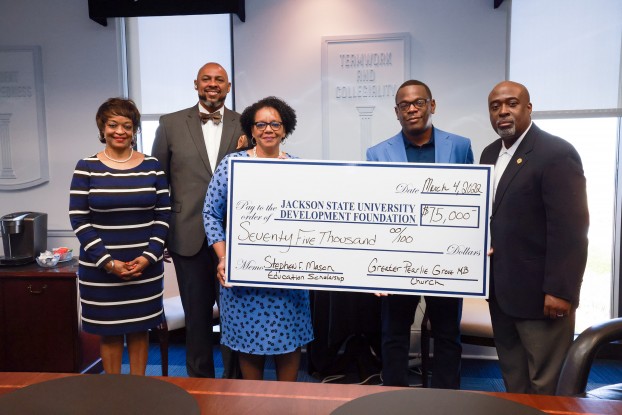 Jackson State University is the recipient of a $75,000 education endowment named for the late Stephen F. Mason, the 17th pastor of the Greater Pearlie Grove M.B. Church. An alum, Mason graduated with a Bachelor of Science from JSU in 1976.

“It is always a pleasure to work with those who really take the time to invest in our students. We are excited about the Stephen F. Mason education endowment and the impact it will make on the lives of our students during their matriculation,” said Thomas K. Hudson, J.D., president of JSU.

Mason’s peers describe him as a man who preached and taught the Gospel of Jesus Christ in a way that encouraged, exhorted and challenged people to move from religion to relationship.

“He was not a man that sought recognition. He did not want his name on buildings or things of that nature. His contribution to the church and the lives of so many people, we could not just standby and allow his legacy to be unheard,” said Rev. Arthur R. Bridges, II, pastor of Greater Pearlie Grove M.B. Church. “We wanted to touch as many lives through him as we could. He was an advocate for education, so instead of putting his name on a building, we thought this was more of an appropriate way to honor his legacy.”